Our best-selling professional 6 W engraving laser designed for industrial applications with a lens adjusting tool and a free High Efficiency Lens. Features a robust design and compatibility with all types of control signals used in CNC and 3D printing market. It can be powered with various PSUs and boasts the most powerful fan for its size, providing outstanding cooling and smoke removal.

New Version of PLH3D-6W-Series Cutting and Engraving Laser Head. What is new?

Enhanced lens adjuster with a rubber seal, compatible with all commercially available M9x0.5 lenses. Wider female screw thread in the PLH3D-6W-XF+ body allows to easily swap the standard lens for the uSpot lens.

The engraving laser head is still compatible with all PLH3D-Series accessories and adapters.

The new generation of PLH3D-6W Series has an even more compact design, which looks even better than the previous one. The wiring of the engraving laser is no longer pigtailed, a cable can be simply and quickly connected or disconnected via a 6-pin terminal.

The engraving laser head is still compatible with all PLH3D-Series accessories and adapters.

- Whenever the ambient temperature of the environment in which the engraving laser operates in a CW mode exceeds 40⁰C (104⁰F), the indication LED will start blinking. Such a warning means that the temperature is about to cross the maximum operating temperature.

- In case the ambient temperature reaches 45⁰C (113⁰F) and above, the indication LED will no longer work and the engraving laser head will shut down.

Factory Set Lens - the engraving laser head is shipped with the High-Resolution Triplet lens installed and adjusted to focus at 60.0 mm (measured from the front-face surface of the laser head to the engraving plane). This focal distance has a well-optimized focal spot size which is suitable for many laser engraving and cutting applications. This is the best-optimized focus distance to start with! 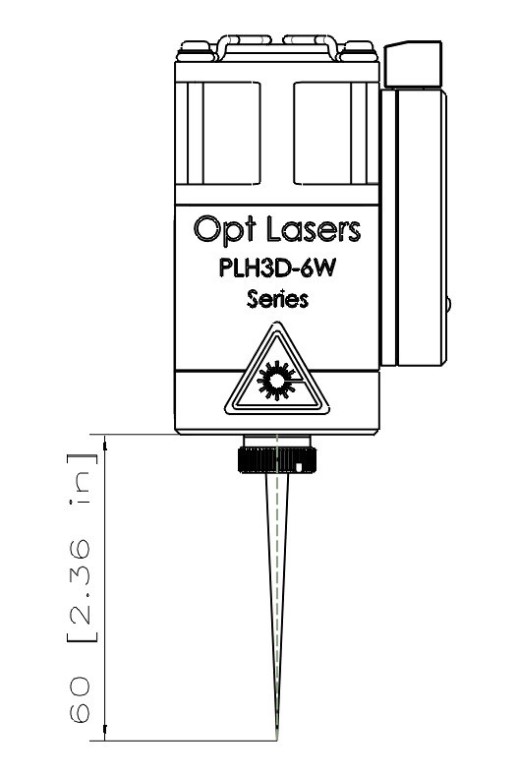 Symmetric Beam Offset - In some applications, such as laser engraving of wood, it is recommended to defocus the cutting and engraving laser by a small amount in order to achieve a symmetrical beam. This can be done by translating the laser engraver forward or backward in the beam propagation direction by the amount shown in the table below. Doing so will allow the engraving laser to engrave with the same line thickness in both the X and Y directions. However, for some applications, such as engraving metals and laser cutting, maximizing the power density is more desirable than having a symmetrical beam. In these cases, defocus is not always necessary or recommended for the best performance.

For example, The PLH3D-6W-XF laser engraver has a factory-preset focus at 60.0 mm from the front of the engraving laser head. Setting the laser to 64.4 mm or 55.6 mm (+/- 4.4 mm from the focus) will allow the laser head to engrave with the same line thickness in both directions.

The Built-in Driver inside the Engraving Laser Head - Opt Lasers is the first company that integrated the laser diode driver directly into the cutting and engraving laser head. A short connection between the laser diode and a driver ensures better protection for a diode, possibility of high-frequency current modulation as well as eliminates inductance effects during the switch-on.

No Additional Cooling Required - the distinct shape of the cutting and engraving laser heads provides the best possible cooling method for a 6 W laser diode. Numerous prototypes have been tested to find the best solution for cooling the laser diode. The current design allows the engraving laser to warm up by only 2 - 3 degrees Celsius after a whole hour of constant work at full power.

Two Types of Lenses Included - The High-Resolution Triplet Lens with lens adjuster has a relatively long effective focal length (EFL) of 8 mm, which allows it to focus laser light to a small spot. All 6 lens surfaces are coated with anti-reflection (AR) coating centered at 450 nm. It is usually preferred for engraving a thinner line, cutting a thicker material due to the reduced convergence and divergence, or when a long distance between the cutting and engraving laser head and the plane of the object to be engraved is necessary.

High-Efficiency Mounted Aspheric Lens is designed to transmit as much power as possible from the laser diode. Its short effective focal length (EFL) of 4 mm makes a variety of working distances possible, but makes the focal spot almost twice as big compared to the Triplet Lens. This lens should be used for engraving thicker lines on wood or plastic. This type of lens is used without the lens adjuster since they need to be mounted closer to the laser diode.

Strongest Fan Available on the Market in its Size - cooling is not the only thing that the fan is doing - 43 m3 of air per hour (25 CFM) makes a great smoke removal system. Additionally, the fan has 70000 hours of life expectancy.

Compatible with Accessories for the Ease of Use - ease of work as well as safety is crucial to us. Accessories we produce are of highest quality, milled on CNC machine, which makes the work easy and safe. Please check out the accessories we prepared for the PLH3D series.

OEM Customization is Available for Manufacturers of 3D Printers and CNC Machines.

Important: PLH3D-6W-XF engraving laser should be powered with a high-quality power supply without anything else connected. Please note: connecting the laser engraver to the same power supply unit as a stepper motor or any other high-impedance equipment is not recommended. Doing so may cause damage to the laser diode.

1. Thermal protection system that cuts off the power from the engraving laser when the ambient temperature is higher than 45°C.

Opt Lasers is a laser diode drivers manufacturer. Due to our experience building over a few years, we created a very high-efficiency driver with low power consumption and low heat production. Additionally, it is the fastest dedicated engraving laser driver available on the market, accepting signals up to 30 kHz. Using 6 W cutting and engraving laser at high speed is no longer a problem while engraving small details or making small radius turns, because the engraving laser controller is able to read all necessary signals.

CNC controllers are able to send modulation signals at great speeds, hence 50 kHz is not a problem to them. This is why a high-speed driver is a must in such a device. The driver is able to read 30 000 instructions every second, which creates enhanced precision and resolution in terms of power control. Also, the maximum driver current is 6 A so using it with 3 - 4 A value ensures an offset and a long life of the driver.

The PLH3D-6W-XF cutting and engraving laser head incorporates a thermal protection system that protects the laser diode from overheating to maintain its lifetime. The unit is designed to automatically shut off when the housing temperature exceeds 47°C. The analog input is protected by a 5 V Zener diode in case the voltage occasionally exceeds 5 V. Regardless, this input should not be connected to higher voltages due to a risk of damage. The laser diode is protected with a Schottky diode, which protects it from a reverse voltage and ESD. In addition, the integrated driver is fully covered to protect it from metal chips in a CNC machine environment.

The focal distance can be quickly set or changed with the included lens adjuster (no additional tools are required). The driver of the unit is integrated directly within the engraving laser head. This feature increases the maximum modulation frequency remarkably, and allows longer cables to be used.

Besides the standard functionality, the small beam spot introduces the possibility of using this product for rapid PCB prototyping. This is done by illuminating the copper layer of plates with the engraving laser after a photosensitive paste is applied.

This lightweight 220 g (7.8 oz) engraving laser requires no additional cooling. The engraving laser's body acts as a heatsink, and the fan design allows it to function as an air nozzle, protecting the lens from the smoke whilst also cooling the laser head. Rigorous testing on several prototype designs allowed us to optimize the heatsink’s shape and enable efficient cooling while maintaining the module’s notably compact design.

Our 6 W cutting and engraving laser head allows engraving or cutting of materials such as wood, stainless steel, paper, leather, cardboard, and many others. For materials that generate smoke when laser engraved or cut, we offer an optional nozzle that is attachable to the front of the unit via magnets built into the engraving laser head (see accessories).

For bulk orders, the PLH3D series can be customized to all customers' needs. We can add customers' logos and all possible additional features. Customization is offered for all 3D printer and CNC manufacturers and distributors.

Our PLH3D series work with many CNC and 3D printing machines including the models:

Note that this list is being continuously updated. Please contact us if you have any questions or feedback regarding compatibility.

Be the first to write your review