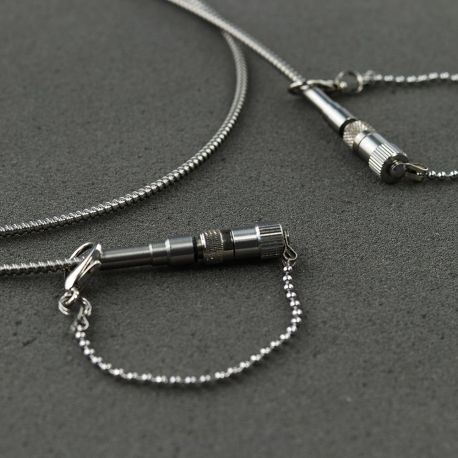 Normally fiber patch cables with connectors such as SMA can tolerate only around 1 W of power. Just several hundred milliwatts of leaked power will heat the epoxy inside the ferrule. This causes the epoxy to liquify and cover the end face, which in turn leads to attenuation, localized heating, and quick power degradation. In contrast, this high-power fiber cable uses an epoxyless air-gap connector with a Copper ferrule on the input end, which allows it to handle upwards of 30 W of power.

The SMA connector on the output end of the high-power fiber patch cable uses high-temperature epoxy inside its ferrule. This allows it to handle higher power levels than are typically realizable, which is advantageous in the event that light reflected back to the fiber is a possibility. However, we recommend only using the designated high-power SMA connector for coupling light into the fiber, as it is designed to accept higher power levels.

Note that the high-power epoxyless air-gap connector contains a suspended fiber that is slightly more susceptible to breakage due to shock than a normal SMA connector. Thus, it should not be dropped onto a hard surface. Care should also be taken to avoid contacting the end face with an external surface, such as when inserting it into the laser. For this reason, it should not be cleaned by making a figure-eight motion on a specialized fiber-cleaning fabric. Additionally, although the connector can typically accept >30 W of power in real-world applications, the coupling efficiency should be relatively high. During initial alignment, we recommend operating the laser at reduced power until the coupling efficiency is increased.