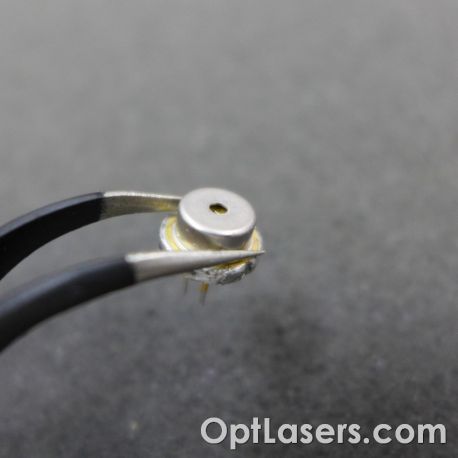 NUBM44 is a high-power laser diode with 6 W of power from a small emitter. This blue laser diode is the highest power laser diode currently available for a laser with a single emitter or in a standard TO package. This GaN laser operates at up to 65 C without significant reductions to the lifetime. NUBM44 is also referred to as a 450 nm laser diode.

This is the Nichia's 6 W capable blue laser diode with a wavelength of 445 nm. These laser diodes come from the NUBM44 diode bank.

NUBM44 is a 445 nm laser diode that emits 6 W of power. It is the highest power available currently from any laser diode in a 9 mm TO-Can (TO-5 package). Although NUBM44 is specified with a typical center wavelength of 445 nm, it is sometimes referred to as a 450 nm laser diode in other literature. Although this is a multimode laser diode, it has an extremely narrow waveguide, which allows it to have nearly the lowest etendue (far-field divergence for a given beam diameter) of any high-power semiconductor laser. The narrow emitter width allows it to be better collimated and focused than other high-power laser diodes.

This 6 W blue laser diode is relatively impervious to operating temperature compared to other high-power semiconductor lasers and has a case operating temperature range of 0C to 65C. The NUBM44 laser diode has a typical lifetime of 20,000 hours at 25C. However, if the blue laser’s case temperature is heated to 65C, the lifetime decreases by only a small factor. This is only possible due to the recently developed Gallium Nitride laser technology. Low long-term degradation levels at elevated temperatures cannot be achieved with the current Gallium Arsenide laser technology that is used for red and NIR laser diodes. Thus, this blue laser diode is a reliable choice for various environments and applications. Additionally, this GaN laser has a special TO-5 (9 mm) package, which allows it to have a lower thermal resistance than is typically possible for a laser diode at this power level. The 9mm TO-Can is also hermetically sealed, which protects the semiconductor laser chip from dust and other contamination. In contrast, high-power red and NIR laser diodes typically require a C-mount package, which has an exposed facet, making them subject to issues with reliability if not operated in a cleanroom environment.

Although the laser is relatively impervious to case operating temperature, we do recommend that suitable heat sinking is used with NUBM44 and other high-power laser diodes. Specifically, a low-thermal resistance (ideally less than 1.5 C/W) mount should be used due to a large amount of heat generated (approximately 12 W) when this laser is operated at full power. A laser diode mount with low thermal resistance will reduce the amount of localized heating produced by the laser element and minimize the path to thermal ground. Such a TO package mount will also reduce the amount of thermal drift, which affects both the power and wavelength. Thermal resistance can be minimized by pressing the TO header against a flat heat spreader surface machined from materials such as Aluminum, Copper or Brass; as well as by soldering it; applying a thin layer of thermal paste can also be helpful.

In order to collimate this laser diode well and collect as much light as possible, we recommend using a collimation lens with a high numerical aperture (e.g., NA greater than 0.50). This is because the far-field divergence on the fast axis is typically 44 degrees. Without a fast (high-NA) lens, some of the power will be lost. Using a longer focal length lens will improve the blue laser diode’s ability to be collimated. To further reduce the slow axis divergence, it is possible to expand the beam on the slow axis using two cylindrical lenses, which Opt Lasers also provides on its webstore. However, in certain applications having a short working distance, it is sufficient to use only a single collimation lens.

Applications of the NUBM44 laser diode

There are numerous and varied applications for the NUBM44 laser diode due to its unique lasing wavelength of 445 nm. Applications include engraving, phosphor pumping, fluorescence light source, imaging, optogenetics, an RBG laser, art and architecture, Thulium-doped fiber pumping, and illumination. For example, by using this laser diode to pump phosphor, some of the lowest etendue white (broadband) light sources can be created. Many applications are also currently being developed due to its relatively new introduction to the market.

Note that the NUBM44 6 W laser diode is very similar to NUBM47. However, our testing suggests that NUBM44 has a lower threshold current and higher efficiency than NUBM47, as well as a similar lifetime and a similar operating power of 6 W. The ability of both laser devices to be collimated and focused is also comparable. For these, and other reasons which are proprietary, we believe the NUBM44 is currently the better option.

Other types of laser diodes and accessories

If a different violet, blue, green or red laser diode is preferred than 445nm, we also provide high-power lasers at wavelengths such as 405 nm, 520 nm, and 638 nm. We also offer accessories for laser diodes. These include laser diode mounts, collimation and focusing lenses, cylindrical lens pairs, as well as electronics such as TEC controllers and laser current drivers.

11 other products in the same category: