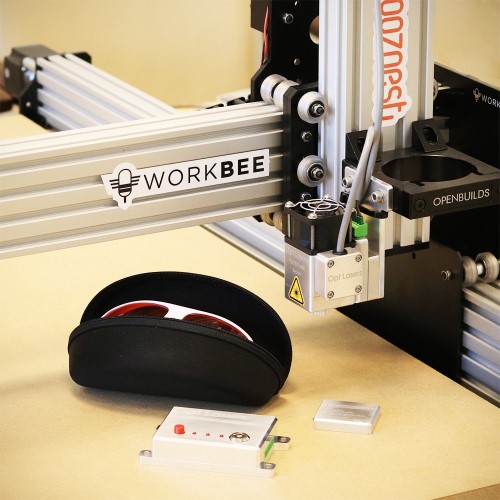 What are the Advantages of Ooznest WorkBee CNC Laser Upgrade with XF+ Laser Head?

What's the difference between 6 W and 7+ W Ooznest WorkBee Laser Units that are available on the market?


Opt Lasers' Laser Heads for Ooznest WorkBee CNCs are based on the highest power laser diodes that are available on the market. This means that if you see any cnc laser module that uses just a single laser diode with an optical power rated at 7 W or 8+ W, it means its laser diode has been overdriven with additional current to increase the power rating. This, however, has an adverse effect on the unit's longevity. From the WorkBee user's perspective, it is better to use a 6 W Ooznest WorkBee CNC laser, because you will achieve much higher yield over our 6 W laser head's lifetime. Nonetheless, if you are happy with a shorter laser diode lifespan, we could overdrive the laser diode for your Ooznest WorkBee or LEAD laser upgrade to 7 W upon your request.


The XF+ CNC engraving and cutting laser upgrade unit for Ooznest WorkBee machines is just like the rest of Opt Lasers Grav's laser heads and other products. It does not contain crucial elements that are made of plastic. Being aware of what Ooznest WorkBee CNC machine operation involves as well as its working conditions, Opt Lasers specifically made a decision not to use any plastic in all vital parts to properly ensure your safety. This is particularly important for Ooznest WorkBee CNC machine's laser housing and laser assembly parts. While it might seem that plastic elements in laser upgrade units would be safe for use, they can very easily crack, bend or break. If that happens, you have little to no control over where the scattered or direct laser radiation goes, which constitutes a major safety hazard.


XF+ is our best-selling 6 W laser from PLH3D Series. Featuring a robust high-quality design, it is a professional high-performance engraving and cutting laser designed for hobbyists and industrial applications alike. This laser is compatible with every generation of Ooznest WorkBee machines. Despite the fact that the kit already includes a power supply unit, the XF+ laser for WorkBee is compatible with a wide range of common PSUs. This WorkBee CNC laser from Opt Lasers has the strongest-for-its-size fan to provide the best cooling as well as smoke removal. In addition, the kit is shipped with a lens adjusting tool (lens spanner wrench), which facilitates changing the focus distance in case you wish to do so.

You can also discover further interesting information about the Cutting and Engraving Laser 6W-Series for Ooznest WorkBee machines.


Why the PLH3D-CNC Universal Adapter is Beneficial for Controlling Your WorkBee CNC Laser?


The fundamental functionality of the PLH3D-CNC Adapter is to “arm” and “disarm” Opt Lasers' laser heads for Ooznest WorkBee CNCs. Arming is understood as turning the laser head power supply on. Once armed, the cutting and engraving laser can then emit the laser processing beam. Conversely, disarming (turning off the laser power supply) brings your Ooznest laser to a safe state where emitting the laser beam is utterly impossible.

The adapter also provides the means to rapidly check your laser for WorkBee by generating a short laser pulse at maximum power. At the same time, this useful feature also verifies if you wired your WorkBee CNC laser head correctly.

Built-in safety features prevent unexpected behavior and misuse in case of an emergency. The key switch guards the cutting Ooznest WorkBee laser against being armed by minors and other unauthorized people. Arming the laser is always done manually by the user (by pressing a button). In addition, special circuitry prevents laser arming in case of any malfunction of the internal electronics.

More importantly, your Ooznest WorkBee CNC laser module is automatically disarmed in case of emergencies such as:

Once disarmed, your Ooznest CNC laser module from Opt Lasers stays in a safe state and rearming demands the user to press the mode button.